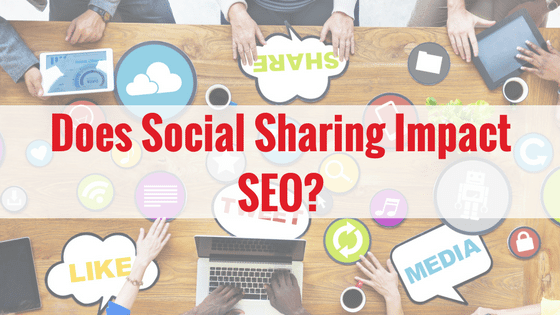 Yesterday, I got up, got my coffee and sat down to cruise Facebook and Twitter, for anything Google may have changed while I was sleeping. Immediately a video was put up by Eric Enge, who I’ve seen speak many times and has written books on SEO. Great guy and super knowledgeable, so it caught my attention. Enge is definitely a thought leader in the SEO space. And, nine times out of 10 I agree 101 percent with what he says. I don’t comment or write blogs because it would make a bad blog post. It would go like this: Yeah, what he said. But today was very different and I wanted to address it. The video they put up was talking about if there is a direct correlation on SEO rankings and Social Sharing.

What is social sharing anyway?

Social sharing is what we all do when we see a page we like or find valuable. We hit the button on the website that shares it back to our social media properties, usually Facebook, Twitter, LinkedIn, Google+ and so forth.

Now those of you who know me personally know I am a social hoarder. You will never see me share stuff related to my business that other people think, nor will you see politics, or religion either for that matter because in as much as I want you to share my posts, I don’t want to cede the limelight to others who I don’t know,  nor do I want you to invalidate my opinion based on your own belief systems. So my social sharing is limited to Dachshunds, who are the funniest breed of dogs on the planet; my deep love for JJ Watt; the QB anarchy of the Houston Texans; the fact that I am proud of being from New Jersey and have a real soft spot for Joe Flacco.

So what did Eric Enge say?

The video was about how Google cannot use social sharing as a ranking variable and how links are still more valuable than social shares. And in both cases, I completely agree with those two assertions. But I walked away from the video thinking of my small business owners that really should depend on social sharing for a few important reasons, and I didn’t want that to be overlooked, and thus why the post about it.

The base premise is that Google does not use social in its algorithm. It cannot see a majority of the social posts from places like Facebook. And even though it has access to Twitter, it’s not using but a fraction of it.  Both of those assertions are correct. And it would seem to me that to have social media signals baked directly into its algorithm would be foolish on Google’s part.

So far I’m directly in agreement with Eric. So much so that I’m going to take this a step further.

Google has no direct control over any of these third-party applications, which in essence is what a social network is. Tomorrow, any one of the giants could change their business model and disrupt the impact their network has. Some of us are old enough to remember know the rise and fall of Justin Timberlake’s social platform, Myspace. Google themselves have a failed attempted at a social network in Google+. And these networks come and go based on trends and fads. Facebook, once for college students now has college students flooding Instagram, with Facebook demographics shifting.  Shifting sands does not allow Google to use this data directly into its algorithm and it would be bad business for them to try.

But does social sharing help SEO?

This where I split with Stone Temple on their opinion presented in the video. Their take on this topic seemed to be presented as a cause and effect between two unrelated things. Meaning just because A happened, and B happened, there was no interconnection between the two.   While I agree, social sharing does not have an absolute direct effect the way a link does, there are many aspects of the present ranking factors that are a way for Google to include signals generated through a robust social media presence in the algorithm, and yet not directly cede control by including them directly into their algorithm.  Understanding the hows and whys of this gives small and upstart businesses a place to compete in an ever growing bunch of hoops businesses must jump through to be successful.

What do social sharing and a co-signer have in common?

Now to understand why I am saying this, a few weeks ago SEMRush put out their list of ranking factors for 2017, with the leading factor being traffic.

We all remember at some point in our lives going to the dealership to buy a car only to be turned down for not having credit. We were told to go find a co-signer. Unfortunately, small and upstart businesses now have similar problems. If you don’t have traffic you may not be legitimate enough to give you a ranking that will actually bring you traffic because you have no traffic. It’s a vicious circle.

In days gone by you could put up a page of good information, and if you had something important to say, your page would find itself atop the SERPs. For a small or upstart business, it was a great equalizer and allowed them to be on the same playing fields as the far larger brands.

But now, with traffic and brand awareness being a large contributing factor, the days of the little guy being able to compete are morphing and small business needs a way to validate itself. Social sharing is the perfect vehicle for this in my opinion whereas it helps traffic, brand, and referrers. Three of the seven factors.

So what are traffic, CTR, and referrers?

These three metrics are really metrics of engagement and validate that your website is ‘real.’ They are found within  Google Analytics.

Now that we understand these three drivers, I want to come back to social media and social sharing. For a small business that needs engagement, which is what these are metrics of, social really boils down to these and can easily be slotted in and used to help drive up the traffic numbers, increase the brand awareness, and therefore drive up the CTR and by appearing across multiple social platforms, it’s a way to increase your referrers, your visibility, and really aid you in getting links.

The rest of the SEM Rush variables, a small business site can handle, meaning how many pages do visitors read? Do they bounce immediately back to Google? And how long is your content? These are all things you can control.

So here is the path I would say a small business should take to help drive organic rankings:

In effect, this will act as a co-signer to help you validate your web site and feed Google some of the data that is part of their algorithm. So, although we can argue that social sharing is an unrelated event and there is no cause and effect, I more think that Social Sharing allows smaller businesses the opportunity to bring some traffic, increase their brand and referrers, thus allowing them to have all the metrics Google is looking for when they choose to rank a page.

For my students, this is an example of what I mean when I say don’t share someone else’s something. Read it. Digest it. And write about it.